Dan Morgan‘s comments on my “How do you measure the value of Gov 2.0?” post offer an insightful perspective I feel they warrant a post of their own.

Creating sustainable, meaningful civic contributions to government is something I’ve addressed before, and it’s something that continues to elude us in the form of civic applications and hackathons, despite the overwhelming attention given to each.

Since 2008, there has been a wave of voting law changes that impose barriers to the ballot box. Georgia Rep. John Lewis, a veteran of “Bloody Sunday,” called the new laws “the most concerted effort to restrict the right to vote since before the Voting Rights Act.”

The right to vote is being chiseled away by voter ID laws that require voters to show government-issued photo ID in order to vote. 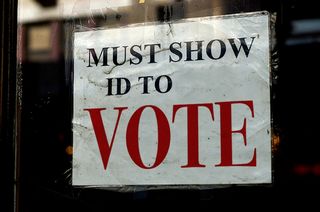 In December, the Department of Justice blocked South Carolina’s voter ID law on the grounds it would make it harder for minorities to vote in violation of Section 5 of the Voting Rights Act. Mississippi and Texas voting ID laws also must be pre-cleared but Texas is not waiting. The Lone Star State filed a federal lawsuit in an effort to speed up a decision.

Strict photo ID requirements will be in place in at least five states – Georgia, Indiana, Kansas, Tennessee and Wisconsin — In November. With Election Day less than nine months away, voters without an official photo ID cannot wait for the challenges to play out at the Justice Department and in the courts.

In Wisconsin, for instance, voters must navigate “The 4 Proofs.”

I am a founding member of the Election Protection Coalition. Still, looking at the infographic makes my head hurt. More worrisome, it discourages voters from completing the application process. So I presented the problem of TMI (read: disenfranchisement by design) at Random Hacks of Kindness and the Hackathon for Social Good. Citizen programmers developed solutions to quickly provide voters with information on how to get a voter ID.

During Social Week Washington, DC, I gave a demo of the Cost of Freedom web-based app developed by Kin Lane, API Evangelist for CityGrid.

Users in Wisconsin can forget about “The 4 Proofs.” Instead, in four clicks or less, they will be able to access information about the state’s voter ID requirements, how to obtain a certified copy of their birth certificate (the document that’s typically produced to establish one’s identity), and the location, hours and directions to the Office of Vital Records using public transit.

I also gave a live demo of the Cost of Freedom text-based app developed by Jack Aboutboul, Twilio’s API Evangelist. Twilio is making an in-contribution of text message services to promote voter education. 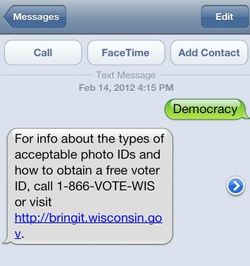 To commemorate the legacy of Dr. Martin Luther King, Jr., we plan to launch the Cost of Freedom App on April 4, 2012.

I will post regular updates about the Cost of Freedom Project and other initiatives that are using civic innovation to protect the right to vote. The conversation about voter ID also gives us an opportunity to raise awareness about disruptive technologies in the public sector beyond election administration.

For more information, please visit us at Facebook.com/CostofFreedom. You can sign up to receive notice when the Cost of Freedom App is launched. END_OF_DOCUMENT_TOKEN_TO_BE_REPLACED

In January 2011, Michael McDonald and Micah Altman founded the Public Mapping Project and began building the open source platform DistrictBuilder to give citizens more of a say in the redistricting process.

After watching the documentary Hacking Democracy, I started researching how government uses voting technology to conduct elections. That’s how I learned about the work of Open Source Digital Voting Foundation.

Oakland, Ca. is the latest major U.S. city to launch a 311 application that allows citizens to report issues directly to government from their smartphones.

Mark Headd has an interesting thought on how to encourage better participation at civic hackathons, suggesting perhaps a registration fee would encourage more reliable participation.

As I mentioned in my 2012 civic commitment post, I’m focused on helping drastically lower the cost, de-mystify the technology and build better websites for local government.